All research is a quest–a quest for knowledge. Granted, it may seem grandiose to apply the word “quest,” with its epic connotations, given the ways in which research is actually conducted. This is especially true in the humanities. (While there’s a modest amount of romance in, say, pipetting DNA samples into electrophoresis gels until thumb cramps strike–cramps being a more recognizable form of martyrdom than the pallid complexion one cultivates beneath the fluorescent lighting of the subterranean library stacks–with a few exceptions like space exploration, even scientific research is hardly the stuff of drama.) But it is indubitably thrilling to find out what you have long sought to know.

It’s worth remembering that some of the classic chivalric quests of old were also quests for knowledge. Yes, those old knights errant did pursue their share of grails and monstrous adversaries, but in Chaucer’s “Wife of Bath’s Tale,” the dubious hero is sent to figure out “what thyng is it that wommen moost desiren”–in other words, what women want. The knight supplies a pretty reasonable answer in the end: personal sovereignty. (Meanwhile the Wife of Bath’s prologue implicitly provides a compelling alternative response: fresh action in the marital bed.) Even so, Chaucer’s canny tale failed to put the question to rest. It has continued to vex thinkers like Freud and inspire lame rom coms centuries later. I guess some questions just grab hold of us and don’t let us go until we’ve grappled with them for ourselves. That’s what makes them the stuff of stories.

As a biographer, I have to grapple with a lot of different questions. Over time, the questions evolve. One begins as a reporter (who? what? where? when?), and becomes a psychologist (or the Wife of Bath’s knight, parsing desire and motivation), and thereafter a poet (seeking symbol, significance, some way to express the universal truths that one life can illuminate), playing various other roles in between. In fact, it’s hardly a compartmentalized, linear progression. Though a poet, a psychologist, and a reporter could each take the same data and make of it a different story, somehow the biographer must speak simultaneously for all three.

Recently I have been most deeply immersed in the role of reporter, delving through documents, searching for specific facts, trying to fill in gaps in the story of who-what-where-when. Specifically: I’ve been reading letters. Hundreds of letters. Hundreds of boring, redundant letters, many scrawled in execrable cursive, which contain nuggets of valuable information mixed in with discussion of the price of pork chops and the possibility of rain. 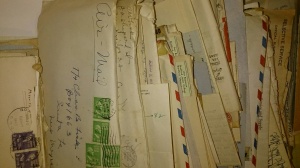 When my subject, Charles Fisk, was nineteen-going-on-twenty, in 1944-45, he lived and worked in Los Alamos, as a member of the Special Engineer Detachment on the Manhattan Project. His parents, back in Massachusetts, sent him letters several times a week. Occasionally he’d get mail from his younger sister, an old high school buddy or ex-girlfriend, or an aunt. He filed many of these letters in chronological order and then bundled them with wire. He then he went on to stuff them in a box for, it seems, the remainder of his life. In a letter Fisk wrote to his own son, in 1980, he complained about how boring all of his father’s letters had been. Though he cherished his father, he took no joy in receiving his letters during the war, rehashing the latest news he had read of the Tunisian campaign, or musing about the robins on the lawn. No wonder he never read them again.

That task, however, has now fallen to me.  These old bundled letters came into my custody in November when I visited Fisk’s daughter.  She loaned them to me quite generously–but also, I think, gratefully. She did not just throw open her attic the moment she met me. After hours of cautious conversation on the phone, she agreed to spend some time with me, from which she (fortunately) concluded that I was not a complete ogre or idiot. Thereupon she recognized an opportunity, as well. Coming from a family of paper-keepers and dutiful correspondents, she had reams of family letters. In a way, this was a blessing; in a way, a burden.  But here was someone (me) perversely willing to read through the hundreds upon hundreds of missives, figure out which ones were interesting and important, and create a digital archive of them all. I could fill her in on the juicy bits and spare her the price of pork.

That, then, is how I’ve been spending many hours over the last couple of months. If research is a quest, a grand picaresque journey, this particular leg  feels a bit like a long road trip across Kansas, where I do a little scavenger hunt each time I stop at a convenience store. Every once in a while, I find some interesting graffiti on the walls of the toilet stall, but little of that is of consequence. But then–then!–the answer to a question that has been aggravating me for months (like how Fisk came to be a regular guest of Mr. & Mrs. Gustave Baumann  during his New Mexico years) comes to light. Suddenly, forsooth, it feels less like a gas station in Kansas, more like I have just done battle, struck a blow for knowledge, vanquished a persistent foe.